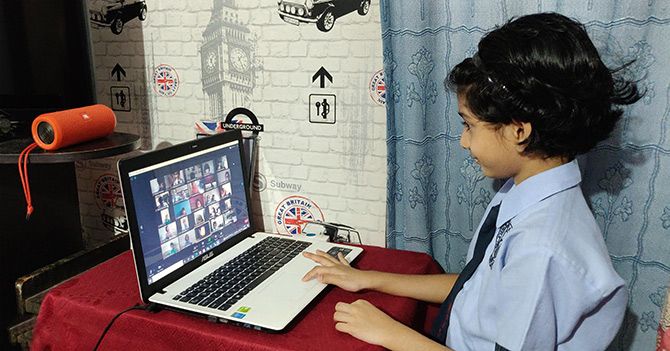 School closures due to the pandemic have had “catastrophic consequences” for students, especially in rural areas, where only 8% regularly study online and 37% study nothing, according to a new survey.

Additionally, the financial stress caused by the pandemic has led to a mass exodus from private schools. More than a quarter of those enrolled in private schools switched to public schools during the 17-month school closure period, either due to declining family income or because online education did not work well for their children .

The results of the survey, conducted in August this year, were based on interviews with 1,400 families in rural and urban towns “populated by underprivileged families, the kind of families that send their children to public schools.”

The report states that “approximately 60% of the families in the sample reside in rural areas and almost 60% belong to Dalit or Adivasi communities.”

The survey shows that access to online education is “extremely limited.” The gap between urban and rural areas is stark, with 24% of urban students studying regularly online, while for rural students this figure was only 8%.

The main reason behind the limited access to online education is that many respondents (about half of them in rural areas) do not have smartphones. Even among families with a smartphone, the proportion of children accessing online learning resources is only 31% in urban areas and 15% in rural areas. This is mainly because “working adults often use smartphones and they may or may not be available to school children, especially younger siblings.” Another problem, especially in the villages, is that schools do not send study materials online or that parents are not aware. Of the 1,400 children surveyed, about a fifth were attending private schools when schools began closing in March last year. A quarter of this sample, of those initially enrolled in private schools, had migrated to public schools in August 2021, according to the survey report. This number could have been much

higher given that many parents are currently struggling to meet the private school requirement to clear all fees before receiving a “transfer certificate.”

Although the Union government directed states to provide meal replacements at noon in the form of food grains and money, an assessment of the land by surveyors showed that the distribution was “sporadic and somewhat random.” 20 percent of urban students and 14 percent of rural students in public schools received none.

Also, Reade – Teachers are key members of our development journey: Lieutenant Governor of Jammu and Kashmir

As learning outcomes surveys have shown in the past, only half of fifth grade students can read second grade texts. “Most parents feel that their children’s reading and writing skills have declined during confinement,” the report says. The report notes that the pre-closure learning gap, combined with a decline in literacy and mass advocacy skills, is a “recipe for disaster.”

“For example, a child who was enrolled in 3rd grade before lockdown, but doesn’t actually master the curriculum after 2nd grade because of his bad situation, and is now closer to 1st grade in that regard , is enrolled in grade 5 today, and will be promoted to the upper elementary level. In a few months! Addressing this massive disconnect requires major changes in curriculum and teaching methods over a prolonged transition period, years in instead of months, “according to the report.