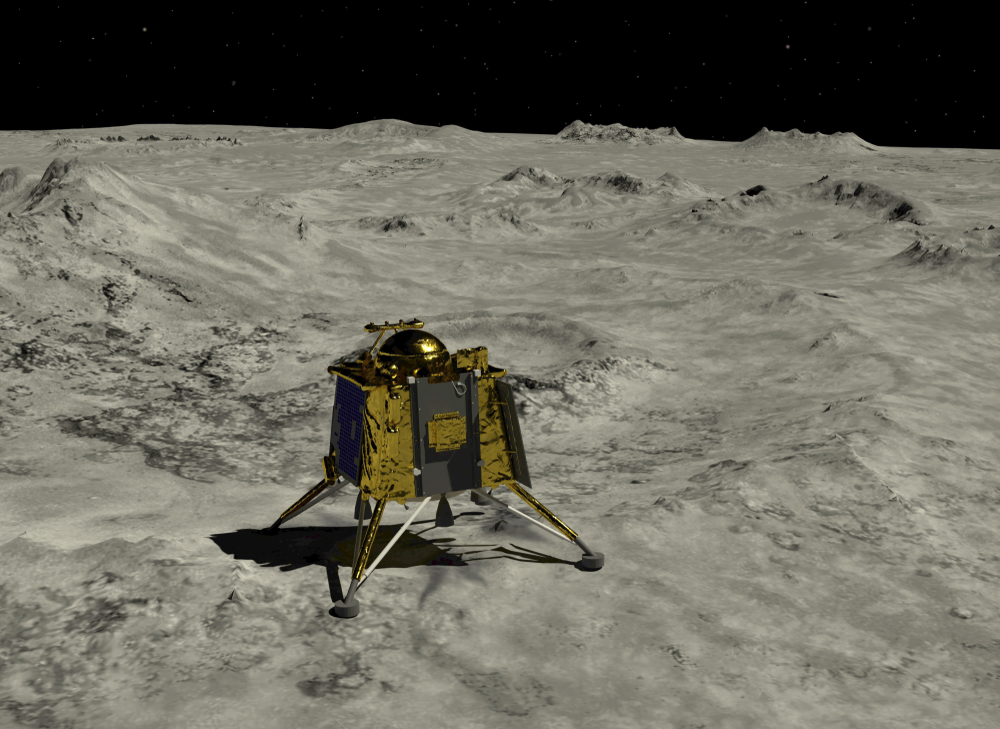 Chandrayaan-2 is the lunar exploring space mission after Chandrayaan-1, developed by the Indian Space Research Organisation. The Chandrayaan-2 mission consists of the Vikram Lander (designed only for India’s first soft landing on the Lunar Surface) , a Lunar Orbiter (for observing the lunar surface and establishing communication between the Earth and the Vikram Lander)  and the Pragyan Lunar Rover (a six-wheeled AI-Powered Vehicle, supposed to communicate with the Lander). All of these were developed in India.

The Chandrayaan-2 was launched on 22nd July 2019 at 2: 43 pm IST (Indian Standard Time). The Rocket used to launch was GSLV Mk III. Second Launch Pad at the Satish Dhawan Space Centre was the Launch site for this mission.

The Prime Objective of Chandrayaan-2 was to show the ability to land-soft on the lunar surface. The basic aim of the mission is to improve the understanding of the Moon

Following are the scientific goals of the mission:

– Study of the Lunar Topography

– Figuring out the Elemental abundance

– Studying the Signs of Hydroxyl and water ice

This Complex mission of performing a soft landing on the lunar surface was to explore the South Pole of the moon, that is left unexplored till date.

Vikram Lander descent was as planned and normal performance was observed up to an altitude of 2.1 km, after which the communication from Lander to the ground stations was lost. Data is being analyzed, tweeted by ISRO on 7th September 2019.

Indian Space Research Organisation (ISRO) Chief, K Sivan said in a statement: We’ve found the location of #VikramLander on lunar surface orbiter has clicked a thermal image of Lander. But there is no communication yet. We are trying to have contact. It will be communicated soon. #Chandrayaan2

The Chandrayaan-2 will reportedly spend seven years in the orbit of the Moon. The High-resolution Images provided by it will help ISRO scientists figure out the presence of water and minerals on the lunar surface.

The first mission, Chandrayaan-1 was the first Indian Lunar exploration mission launched in the year 2008. The mission included a Lunar Orbiter and an impactor. This mission did 3,400 orbits around the Moon. The observation of the spacecraft was the presence of water molecules near the South Pole of the Lunar surface.

ISRO has inspired the whole country especially the young generations who will shape the future of the country.

The whole world watched the progress of the 1,000 crore Chandrayaan-2 mission from the very start. At 1:50 am on Sept 7, the entire nation was sitting in front of the TV, looking at Chandrayaan mission. In those 100 seconds, I witnessed how an incident awakened the entire country tied the country together. Like we talk about sportsman spirit, it’s ISRO spirit in Hindustan now, said, PM Modi. The whole country is proud of ISRO, with Chandrayaan-2 India has made history by reaching the Moon’s surface in the first attempt. India did in just one attempt what took America, Russia, and other countries several attempts.

PM Modi visited the ISRO center in Bengaluru to witness the landing of the mission, along with youngsters from different states of India, who participated in the ISRO Space Quiz on MyGov. The large scale participation on the quiz showed the young generation’s interest in space and science.

The ISRO has almost eight missions planned for the next decade. The planned missions are important to India including sending to Mars, Venus, Sun, Gaganyaan Manned Space Mission and the Chandrayaan-3 including others.